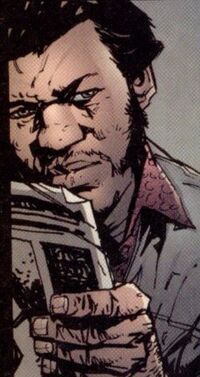 Bilal Christian was a dirty Bounty Hunter that didn't play by the rules. He frequently stole the bounties of other bounty hunters and became despised in the community for doing so.

A Feud with Jinx

Jinx Alameda and Manara were close to arresting a perp. Jinx had put in a lot of work of flirting with the man to lure him to a place where she could take him down. Once she slapped the cuffs on him, Bilal appeared and sole the bounty from them starting a feud with Jinx.[1]

While hunting a perp named Arthur Brooks, he fired a bullet that ricocheted off the walls and struck the next door neighbor, K.C. McRory. Twitch Williams was in the apartment with her and swore he'd get revenge for K.C. accident.[2]

Bilal later showed up and surprised Manara once more. Manara was sitting with a new bounty, Bob Matson, and Bilal strong armed him into stealing him. As he left, Manara called Carl Munoz, the bail bondsman, to lie to him that Bilal was coming to hurt him.

When Bilal showed up at Munoz's place, a quick gunfight occurred and he attempted to escape out the back. Jinx waited for him but he escaped when a man caused a distraction.[3] When Sam chased him down and had recently discovered K.C. died from her injuries, he took out his aggression on Bilal and shot a bullet through his head, killing him.[4]