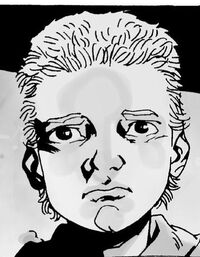 Billy, along with his twin brother, Ben, were the sons of Allen and Donna. They lived with their parents in Gainesville, Georgia until they sought refuge in the city of Atlanta.[1]

Despite losing both parents to roamer attacks,[2][3] Billy seemed to enjoy a relatively normal childhood, especially under the care of of Andrea and Dale after they escaped from the prison and holed up in the Greene Family Farm. It was there however, that Billy discovered Ben had mutilated and killed a barn cat. Billy swore to keep the secret after his brother threatened to do so.[4]

On the road to Washington, D.C., shortly after Ben started to show his deteriorating mental state, Billy died stabbed by his brother, who excused himself saying "don't worry, he's going to come back" when Andrea found the dead body.[5]