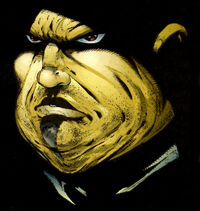 Billy Kincaid is a character in Todd McFarlane's Spawn comic book series. He is a reoccurring villain in the series.

Kincaid is released from a mental institution, where he had been placed because he was suspected of murdering several children. The most notable of the cases, and the only one Kincaid was actually charged with, was the disappearance and murder of a senator's daughter. In his previous life as Al Simmons, Spawn had been hired to kill Kincaid, but had arrived just as Kincaid was apprehended by the police and so was unable to complete the mission.

Upon his release from the institution, Kincaid immediately goes back to kidnapping and murdering children by luring them into his ice cream truck. He kills two children before Spawn kills him and hangs his bloody corpse in the precinct office of detectives Sam Burke and Twitch Williams, who had been investigating Kincaid.[1]

Kincaid wakes up in Hell. He is greeted by the Vindicator, brother of Spawn archvillain the Violator. The Vindicator leads Kincaid to the Eighth circle of Hell, the same level where Al Simmons made a deal with Malebolgia to become a Hellspawn. Kincaid is fitted with a similar suit as Spawn's and informed that he is now in the service of Malebolgia.

Spawn returns to Hell, where he battles the newly-empowered Kincaid. It is a quick battle, as Spawn easily defeats Kincaid and severs his head.[2]

New York City is struck by a series of homeless murders. The city is gripped by their violent and random nature. After brief shootout which incapacitates Twitch Williams, the city breathes a sigh of relief as the murderer is caught.

However, soon another string of murders begin with Sarah Frost being revealed as the murderer. It is discovered both killers bore a mark on their necks.[3]

Soon, Spawn, Sam, Twitch, and Cogliostro, discovered that Kincaid's ghost has returned to earth and is forcing people into acting out their most violent impulses. With each murder, Kincaid not only damns the innocent souls coerced into committing the crimes, but grows stronger himself.

Eventually, Spawn leads Kincaid, inhabiting a police officer, into the Dead Zone, an area of the New York City Bowery Alleyways where Heaven reigns supreme and Hell has no power. Now powerless, both Spawn and Kincaid fight each other in a hand-to-hand battle to the death. During the melee, Twitch fires a single shot into the body Billy is inhabiting's forehead. It instantly killed the cop's mortal body and the powerless Kincaid simultaneously.[4]

Kincaid makes another brief appearance as a denzien of Hell as Spawn passes him on the way to battle Malebolgia.[5]

Kindcaid reappeared to torment Christopher, the lost soul sealed within Spawn's heart.[6] Christopher is given the form and powers of a Hellspawn by the mysterious Man of Miracles, and eventually runs afoul of Kincaid, who operates a toystore filled with Spawn action figures. In later issues, Christopher confronts Kincaid again at a diabolical carnival revealed to be a portal to Hell. Kincaid forces Christopher to watch every murder he commits. Christopher's eyes burn out of their sockets, and his Necroplasmic uniform then tears Kincaid apart.

Billy Kincaid was featured heavily in the HBO animated series Todd McFarlane's Spawn. He was voiced by Ronny Cox.
Add a photo to this gallery

Retrieved from "https://imagecomics.fandom.com/wiki/Billy_Kincaid?oldid=67136"
Community content is available under CC-BY-SA unless otherwise noted.