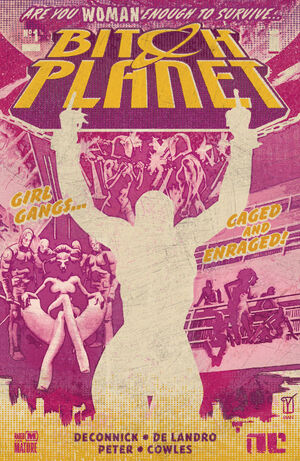 Kam Kogo is asked to take part in a game called Megaton after being discovered fighting off the guards who killed Marian Collins, at the request of Marian's husband who wants to marry his new girlfriend. She is convinced by Violet, Meiko, Fanny, and Fanny's girlfriend Ranelle to take part in the game; otherwise she will be killed by the Fathers, a patriarchal panopticon. Makoto-san has a meeting with the Father, where he is instructed to build a new off-site facility in six weeks' time. During the conversation, it is revealed that Makoto is Meiko's illegitimate father. The prisoners play a practice game of Megaton with the guards, and one of the guards breaks Meiko's neck by cheating at the game using brute force. 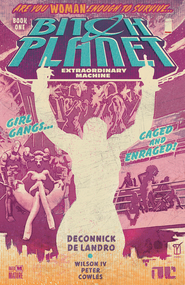 Retrieved from "https://imagecomics.fandom.com/wiki/Bitch_Planet_Vol_1_1?oldid=62853"
Community content is available under CC-BY-SA unless otherwise noted.