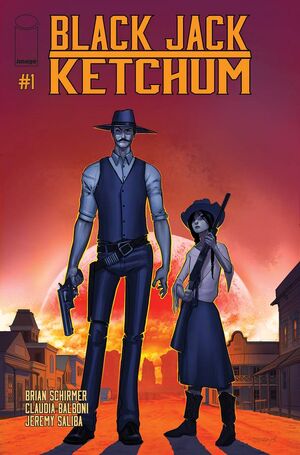 I'm not the guy you're looking for.

Tom Ketchum flees through the wild west with his talking gun. He's pursued closely by Dusters, bounty hunters. He dips into a saloon and teleports to another place upon passing through. The Dusters arrive and don't pass through as they cannot teleport the way Tom can.

Elsewhere, the Judge has a man bound and tied. He asks him if he knows his intent. The man tells him he knows he's violated the oath of becoming a sheriff. The Judge kills the man.

Elsewhere, Tom plays cards at a saloon. Two bounty hunters attempt to take him in but his Mute friend takes them both down. He decides to teleport as if two small time bounty hunters can find him, the Dusters won't be far behind.

Later, Tom talks with his gun about being pursued by the Judge. They are suddenly attacked by Dusters. Mute covers him as he makes a break for his horse. One his journey he's suddenly chased by a train. It consumes him and he finds himself confronted with the Banker, Rancher, and the Rail Baron. They tell him it's time and they kill themselves. Tom is now in charge and he doesn't know what this means. He tells his gun he's going to head out and find the real Black Jack Ketchum to sort things out.

In a dreamlike version of the Old West, Tom Ketchum struggles to clear his name”and stay alive”when he's mistaken for wanton outlaw "Black Jack" Ketchum. With the aid of his talking sidearm, a secretive gambler, and a mute girl with a Winchester, Tom evades the mysterious Union and its supernatural enforcers, the faceless Dusters, as he's forced to question his identity, his sanity, and his very existence.[1]

Retrieved from "https://imagecomics.fandom.com/wiki/Black_Jack_Ketchum_Vol_1_1?oldid=67797"
Community content is available under CC-BY-SA unless otherwise noted.