"Black Magick Book One: Awakening, Part One of Five" 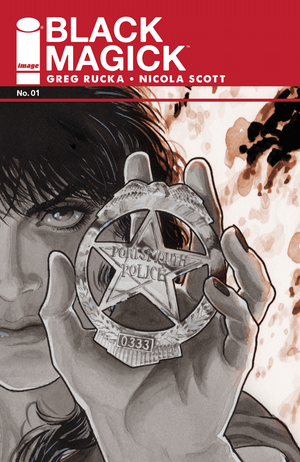 Appearing in "Black Magick Book One: Awakening, Part One of Five"

Plot Synopsis for "Black Magick Book One: Awakening, Part One of Five"

In Portsmouth, Virginia on the Fall Equinox, a group of witches gather and chant spells. When one of them has a cell phone go off, they immediately break character and ask who broke the ritual. Rowan Black pulls out a phone and announces she needs to leave for the work call. The leader walks over with a knife and holds it to her face and tells her to ground herself before leaving.

At the scene of the crime, Rowan appears and is let in by Detective Morgan. She escorted to the truck where Captain Pete tells her there is a hostage situation inside where he's asking for her by name. He tells them they have four hostages. When Rowan steps into the van, the man inside senses Rowan and orders she come in. In exchange, he'll release the four hostages. The police wire her and tell her the safeword of Avalanche. When she drops the keyword, they'll come in with flashbangs and smoke bombs.

Upon entering, she smells Kerosene and realizes that she can't use the safeword. He hides in the backroom and refuses to come to the window as there are police snipers outside. They begin to realize this man knows what he's doing and has the playbook on what they do. The man orders her to strip. When he sees she's wearing a wire, he tells the people on the mic to back off and crushes the receiver. He lets the hostages go one-by-one and orders Rowan into the back room. He tells her he knows what she is, and that she is a magick user. When he attempts to throw a match on her, she whispers a spell and lights him on fire to save herself.

Later, she sits with blankets around her on the back of an EMS vehicle. She calls someone named Alex and is surprised her identity was discovered.

The hammer falls this Halloween! From New York Times bestselling and Eisner Award-winning writer GREG RUCKA (LAZARUS, Stumptown, Gotham Central) and superstar artist NICOLA SCOTT (Birds of Prey, Secret Six, Earth 2)! Detective Rowan Black works robbery/homicide for the Portsmouth PD, but her greatest mystery is the truth about herself...both who she has been, and who she will become. Yet there are others in Rowan's world with very long memories, and the power that one person holds, another will always covet. PLUS, each issue also features an all-new work of original fiction by GREG RUCKA! A new gothic-noir ongoing series about legacy, destiny, redemption...and the price of magic.

Cover B by Jill Thompson will be available with Diamond Code AUG150554.

Magazine-size variant by Rich Burchett will also be available with Diamond Code AUG158533.

Retrieved from "https://imagecomics.fandom.com/wiki/Black_Magick_Vol_1_1?oldid=63528"
Community content is available under CC-BY-SA unless otherwise noted.