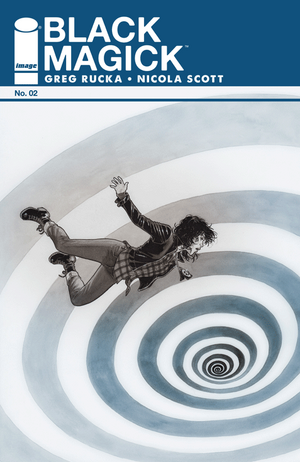 Get this. His name? Rowan White.

Rowan Black heads into work. Captain Pete debriefs them on the case and puts various officers on tasks to investigate further. He tells Rowan she has to follow up with I.A.B. since she was the last person to see the perp alive.

Later at the office of N. Bellowes and F. Prestes, the I.A.B., Rowan tells them she never met the guy before and doesn't know why he attacked her. She also tells them he willingly killed himself in front of her. They show her the lighter he used to kill himself and it has a hammer imprinted on it. She says she's never seen it before. They are slow to believe her story but release her.

Later, Rowan meets Alex at a coffee shop. Alex rebukes her for bringing a cell phone to their ceremony the night before. Rowan tells her she has more important manners and explains the hammer on the lighter. They both think this opposing group hasn't used magick in a long time and this is disturbing as it was powerful magick to mind control the perp.

Rowan leaves and meets up with Morgan at the docks. They find a dead body floating in the river. It is identified as Bruce Dunridge, a powerful underworld dealer. Rowan is concerned his left hand is cut off.

At the station, the perp that burned himself is identified as a missing persons, Rowan White. A strange coincidence with Rowan Black's name.

Retrieved from "https://imagecomics.fandom.com/wiki/Black_Magick_Vol_1_2?oldid=63527"
Community content is available under CC-BY-SA unless otherwise noted.