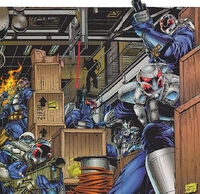 The Black Razors are International Operations's fighting force, working for the Director of Operations. Usually they wear light-weight protective armor. They are among the best trained human fighters on the planet and are often sent in to deal with parahuman threats. The Black Hammers are a group of Black Razors wearing large powered armors. Formerly led by Ben Santini. With the collapse of I.O., most of them found work in other government agencies. A group of disgruntled Black Razors teamed up with Black Arts to stage a series of attacks against Department PSI and other government agencies.

Retrieved from "https://imagecomics.fandom.com/wiki/Black_Razors?oldid=67268"
Community content is available under CC-BY-SA unless otherwise noted.