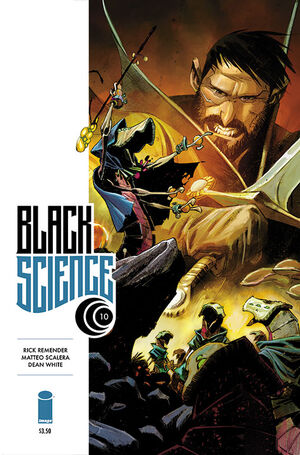 The Dralns bring Pia McKay and Nathan McKay to their leader. He asks for the key to the Pil'ar, and starts using his telepathy to gather information out of Nate's mind. The Draln references a eucalyptus pushing them through a series events to this moment and claiming this isn't random.

Pia recalls a time she spoke with Jennifer about the suits. Jennifer explained the suits helmet would block out everything and keep them safe.

In the present, Pia leaps at Nathan and kicks his helmet on to turn on the shield severing the telepathic bond that paralyzed him. As they run, the king Draln informs them he has the information they need and to kill them and release them from their suffering.

As Pia and Nate run, the jump on a local wild animal that takes off when it is stabbed by javelins thrown by the telepathic worms. Pia tells Nathan they need to get back before the worms do.

In the middle eastern area, where the man is running with the briefcase,[1] Kadir III enters the room and offers the, "key" to Mr. Blokk. When Mr. Blokk asks about the traveler, Kadir tells him he reminded him of Gahiji Makalani and that his men have dealt with him. Mr. Blokk pulls out a small hand held key to the Pillar that the dimension warping Grant II had earlier.[2] Mr. Blokk plans on putting his stamp on everything, the Pharaoh Absolute. Kadir in return asks for Mr. Blokk to complete his end of the bargain and release Sara III to him.

Elsewhere, Pia and Nate continue riding their creature through the air. Pia talks about resenting Grant and his decisions for choosing work over them.

Rebecca and Shawn prepare for the Pillar to jump in 40 minutes. Rebecca blames herself for all the people dying and Shawn comforts her. She tells him she was pulling the strings all along. She got Kadir to hire Grant and wanted Grant to build the Pillar so she could see someone she lost.

Suddenly Pia and Nate arrive on their flying lizard. They tell them the Draln are coming and they all need to activate their helmets to protect themselves. Kadir speaks up to remind them he doesn't have a helmet and is vulnerable.

Retrieved from "https://imagecomics.fandom.com/wiki/Black_Science_Vol_1_10?oldid=55195"
Community content is available under CC-BY-SA unless otherwise noted.