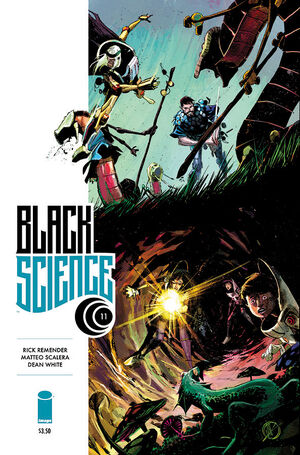 A winged mantis watches the Anarchist League of Scientists through a looking glass along with several other dimensions.

Kadir and the Shaman agree to head up top by the Pillar. Even though an army approaches, they believe they can distract them to let the others survive. The Shaman tells him he will share the spirit of the Raven to help them survive. As they head up to the surface, they agree to kill themselves if they get captured rather than give them the secrets of the Pillar.

Nate asks about what they'll do with Krolar. Pia says they can come back later when everything is fixed to return him to his family.

Leader of Dralyn tells them he is the Eucalyptus of this world and the anti-god has brought them a far distance to that place. The Shaman enters battle and tells them the Blokk of his world brought nothing but pain and misery. He tells them all Blokk's are evil and he won't let the Pillar fall into its hands.

In the cave, Shawn stands watch. Chandra begins worrying and looks at her book. When Rebecca become suspicious she sees Chandra's book is written in another language and that it is a perfect blueprint of the Pillar. Rebecca confronts Chandra when Chandra speaks in fire-spirit that she is the savior of a dying people and the last thing in the Eververse anyone would ever want to piss off.

Suddenly, Grant II and Sara II re-appear with the handheld pillar. They claim their children again.[1]

Outside, the Shaman and Kadir are slowly worn down by the waves of Draln. Kadir starts to think about how he's not bringing the kids back for Grant, he's bringing them back for Sara. The Death Cult penetrate Kadir's mind finding the location of the Pillar. Suddenly, Grant III appears teleporting in with a hand-held Pillar. The Death Cult attack and he drops the Pillar. Kadir grabs him and the Shaman as they run back to the cave to prepare for the jump.

In the cave, Grant II and Sara II are about to steal the children. Rebecca knocks grant over a stalagmite, and impales him killing him. Sara II screams and gives Rebecca the death stare as she curses at her, "It's always you."

Chandra picks up the handheld pillar from Grant II.

1st Dimension Grant enters the room and sees the events unfolding. He says it's the same in every dimension and they have to stop it or reality will break. He claims to want to go to the center of the Eververse to stop the original Grant from starting all of this.

Retrieved from "https://imagecomics.fandom.com/wiki/Black_Science_Vol_1_11?oldid=55196"
Community content is available under CC-BY-SA unless otherwise noted.