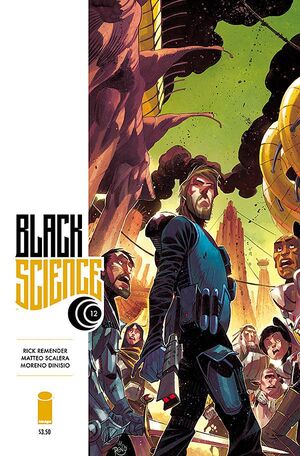 1st Dimension Grant McKay recalls bleeding out under the wreckage.[1] He recalls the sentient monkeys using their science to save him as they saw him as his only source of being saved from their planet. As he was looking in his final moments he saw a large mantis like creature. However, once he was saved, he was forced to work on a the Pillar to create a way out for the monkeys. Grant secretly found a handheld pillar and used it to escape from world to world. He found he got no closer to his kids and eventually ended up in Middle Eastern area where he was attacked for the pillar.[2]

In the present, 2nd dimension Sara McKay blames Rebecca for murdering 2nd dimension Grant McKay.[3] She reveals that Rebecca has other motives and urges her to admit them to the group. Nathan McKay suddenly becomes sick since he needs his insulin and the Shaman heals him completely of diabetes. The Dimensionauts look around and find Sara has slipped away in the commotion and Pia McKay has chased after her.

As she chases Sara, Pia stumbles into a man in a technological suit burning bodies with a flame-thrower. When he sees Pia wears the Onion Badge, he calls her a heretic and blames her for bringing a virus upon the city. He chases her and corners Pia. Sara jumps down and stabs the man's backpack forcing him to explode. She grabs Pia and they both flee from more of their pursuers.

Grant McKay puts on second dimension Grant McKay's clothes and asks Shawn to help him track down his daughter before the next jump. The stumble into a large room with an Onion Badge symbol in the middle of it and pictures on the walls of them as roman conquerers.

Retrieved from "https://imagecomics.fandom.com/wiki/Black_Science_Vol_1_12?oldid=55197"
Community content is available under CC-BY-SA unless otherwise noted.