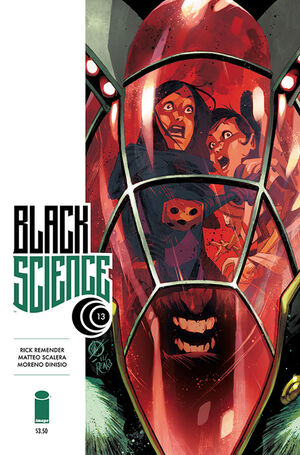 In years past, 1st Dimension Grant McKay and 1st Dimension Sara McKay argued in their home about how much time Grant spent away from his family. He blamed them for forcing him to work for an evil corporation. He berated Sara for being unable to find a job and help support the family. The stopped arguing when the found Pia and Nate staring in fear at them from the stairs.

In the present, Grant plays a message from third dimension Grant McKay who tells them he has accidentally had a member of his team unleash a virus upon their world. He sloppily traveled to other dimensions bringing it up on them as well. 1st dimension grant reminds Shawn protocol is to always have their helmets up. Shawn realizes he didn't have his up in this world and potentially is infected with the virus. Technological soldiers arrive and find Grant and Shawn. During the scuffle, Shawn frantically searches or something when Grant activates his jetpack to propel them both out of the facility where the soldiers are attacking them.

Second dimension Sara tells Pia that she's important and shouldn't have come after her. Pia reminds her that she learned when she was a troubled teenager that her mom always said to never give up on family. They are suddenly discovered by the techno soldiers who announces they are infected to their radio. The soldier unleashes his flame-thrower on Sara and burns her.

Retrieved from "https://imagecomics.fandom.com/wiki/Black_Science_Vol_1_13?oldid=55198"
Community content is available under CC-BY-SA unless otherwise noted.