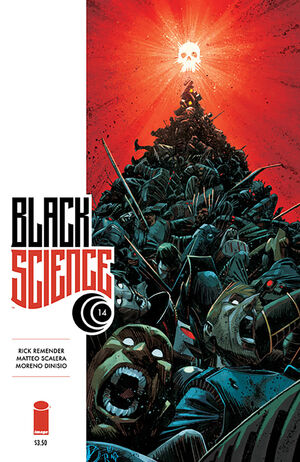 1st Dimension Grant McKay flies through the air with Shawn as they attempt to track the vitals of Second Dimension Sara McKay and Pia McKay. Upon arriving, they find Sara and Pia bleeding out and dying from burn marks. Shawn announces they only have enough adrenaline to start one of their hears, and Sara requests to give it to Pia. Grant grabs Pia and promises to have the Shaman heal her. However, once they peer outside, they find hundreds of Centurion troops and soldiers marching outside.

Back at the Pillar, Kadir asks Rebecca if what second dimension Sara said about her having ulterior motives was true. She denies and and tells him it's not her fault Grant fell for her. She tells him to be honest that he doesn't really care about the kids either, he just wants Sara back.

Shawn and Grant sneak back to base and have the Shaman heal her. The Shaman asks how many worlds must he save from Grant's recklessness. He tells him he doesn't protect Grant, he protects worlds from Grant and asks how much longer this will go on. Shawn sticks up as well and tells him they made a promise to leave each world better than when they arrived. He pushes for the to stay and heal this world of the virus so it doesn't continue to spread. He points out the paths of the jumps aren't random. They are clearly heading to worlds where other dimensionauts have been. Grant agrees and grabs Shaman's device to disperse the cure across the city.

Retrieved from "https://imagecomics.fandom.com/wiki/Black_Science_Vol_1_14?oldid=55199"
Community content is available under CC-BY-SA unless otherwise noted.