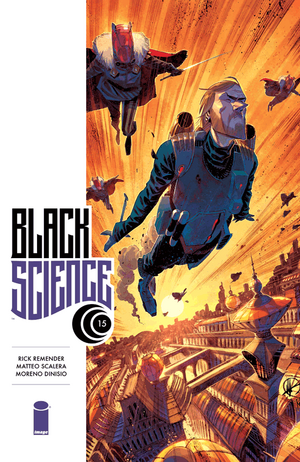 Institutional learning facilities are traps intended to control the mind, subdue your soul, and keep you in debt until you're too old to cause trouble.

Shawn recalls when he was was about to receive his doctoral degree. He was convinced by Grant McKay to join his research and abandon receiving his degree at the last minute. Grant argued getting a degree was someone else validating what he already knew and he'd end up on a downward spiral towards working towards other people's goals.

In the present, Grant flies over the city with the Shaman's healing device. The device tells him it will take several minutes to calibrate the cure. The kids argue with Kadir over fixing the Pillar. He tells them they are just mad Grant has once again prioritized others over them and walks away from the group. The Shaman wonders how many other worlds are being destroyed by them interfering. Nate reminds him that his dad once told him getting things wrong is just a chance to make things right.

Above them, Kadir skulks about everyone always choosing Grant's side. One of the Centurions corners Kadir and claims to know who he is. When removes his helmut, Kadir responds with, "you!"

In the skies, several centurion soldiers chase Grant. Grant tries to tell them he's trying to cure the virus and not spread it, but they don't listen as they press their attack. A ship suddenly teleports in and knocks Grant back forcing Grant to drop the machine and stop the cure from being spread.

The Shaman decides he's going to break the Pillar so it never jumps again. He knocks Shawn aside and is about to smash it when Rebecca pulls out her gun and blows a hole in the Shaman's head, stopping him.

Retrieved from "https://imagecomics.fandom.com/wiki/Black_Science_Vol_1_15?oldid=55200"
Community content is available under CC-BY-SA unless otherwise noted.