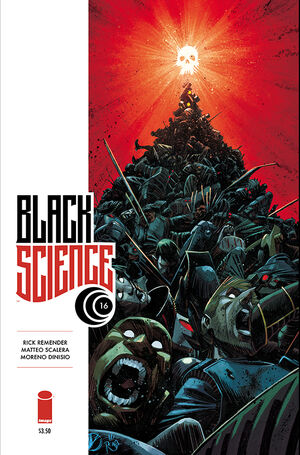 Institutional learning facilities are traps intended to control the mind, subdue your soul, and keep you in debt until you're too old to cause trouble.

Grant McKay recalls working on the Pillar years ago. He was unable to figure out the homing beacon. He contemplated quitting the project but Rebecca Dell pushed him to stay. She admitted her feelings for him and the two began their affair with a kiss.

Meanwhile on the 5th dimension, Grant flies towards the falling device and scope it up at the last second. He asks the device if it needs much longer to dispense the cure for the world disease as he's pursued by several Centurions. He recalls his past mistakes and wonders if he's doomed to repeat them. He made a promise to leave this world better than the way he found it and decids to push forward to accomplish his task.

5th dimension Tacitus attacks Kadir. He blames him for the plague and doesn't know how he survived the inquisitions. Realizing the Kadir of this dimension has caused an issue, he fights back and knocks Tacitus out. He repeats that he agrees he's not a good man as he walks back towards the pillar.

At pillar, Shawn can't believe Rebecca killed the Shaman. They begin patching the pillar as it only has enough juice for one more jump. Shawn suddenly notices Rebecca programmed the wrong home. When he attempts to fix it, she knocked him out. Pia checks Shawn's pulse but announces he has died. Rebecca begins to feel the guilt for her choices. She tells them she programmed the alternate home in as she had to go back to when she can save her twin brother's life from dying in the well.[1] Kadir shows up and holds a sword to Rebecca and tells her to back away from the pillar. When Grant arrives and sees Kadir, the man he mistrusts, holding a sword to Rebecca and his friend Shawn laying dead, he jet packs into Kadir and attacks him. He stabs a sword into Kadir as the pillar makes another jump and Rebecca admits it was her that killed Shawn.

Meanwhile, the Centurions notice the atmosphere has been purged of the virus. Chandra jumps in to the dimension with the Fire Spirit in control of her body. They see she wears the same shit as the Dimensionauts and thank her for saving them. She flashes a sinister smile and unleashes a fireball incinerating everyone in the area.

Retrieved from "https://imagecomics.fandom.com/wiki/Black_Science_Vol_1_16?oldid=55201"
Community content is available under CC-BY-SA unless otherwise noted.