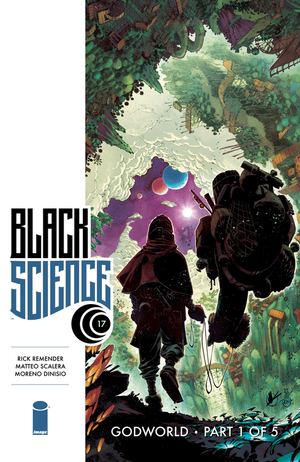 You see, crazy isn’t hearing voices. Crazy is doing what the voices tell you to.

Plot Synopsis for "Godworld, Part 1 of 5"

Three years after the jump, Grant McKay finds himself forgetting his past as he lives on Godworld. He walks with a floating helper who continually asks him, “why” to everything he says. Grant tells him he feels like something is eating his brain. Grant grows annoyed and by the time they return home, he slams the door locking the helper outside of his house. Inside, a droid reminds him of his past and his research to use Tellurium to power his beacon to return home.

Grant has a dream the night he was sent home from school sick. Mr. Rolland, his neighbor, asks him if he wants to come in for some hot cocoa and Grant turned him down.

As he entered his home, he walked in on his mom cheating with Ron. His mom then told him a Goongaloonga was a magical creature who eats kids who tell secrets. She informs him that Ron was her secret and that he must never tell his father about the secret.

In the present, Grant wakes up from reliving his childhood memory. He thinks about how he’s going crazy and the Mantis in the mirror tells him he’s not going crazy. It tells him to head North as he’s been here too long.

He packs up his supplies to head out for the day. He’s suddenly attacked by a Goongaloonga and he thinks he’s dreaming. He’s surprised when his brother, Brian, jumps down to save him. Brian pulls him into a blue light and tells him he isn’t on a planet, he’s on Godworld.

Retrieved from "https://imagecomics.fandom.com/wiki/Black_Science_Vol_1_17?oldid=67798"
Community content is available under CC-BY-SA unless otherwise noted.