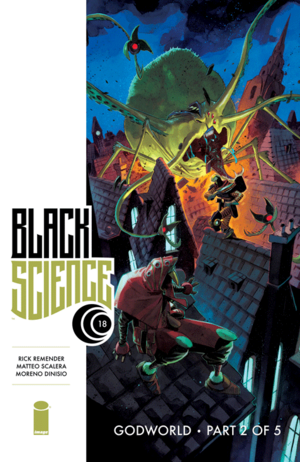 We were just using each other. It's what people do.

Grant McKay finds himself nearly run over in the middle of the road. A penguin police officer gets out of his car and asks if he's alright. He offers to take Grant home and Grant tells the man he has no home. The officer takes him to a local bar where they run into Rebecca Dell. She makes a pass at him but he pushes her away and says he can't give her what she needs

He pulls a seat up next to Brian McKay. Grant tells him he was just using Rebecca as that's what people do. Brian fires back at him that he's always negative. Suddenly, Mr. Blokk enters the room and announces a puppet show. He has his puppets act out a scene that represents Grant's childhood and Grant feels a sense of vertigo sweep over him.

Grant begins to remember how his father was berated by his mother for not taking care of her. He spent all his time working, she began to lose feelings for him. When she said she was going to leave, he sat in the shed one day about to blow his brains out. Grant interrupted him and told him it's not his fault. His mom had secret boyfriends that he didn't know about. When his father heard this, he lost his faith even more. Later that night, he took his own life.

Sandy McKay couldn't believe her actions drove her husband to commit suicide. She blamed Grant for the action and always mistreated him and favored Brian from there on out. She chides him for standing out and not having friends. She tells him he wastes his time on the science experiments. Suddenly, from the mouth of the Grant McKay puppet, a Goongaloonga pops out and chases him. His brother pushes him out of harms way and yells out to him asking him why he always runs away.

Grant escapes to another home. He finds Sara, Nate, and Pia sitting around watching TV. As he approaches, he realizes they're watching a tape of him sleep with Rebecca and repeat his mother's sins.

Grant turns into the Goongaloonga and as he pleads he didn't ask for any of this. Brian breaks down and confronts Grant as the Goongaloonga. Brian admits he was weak as a child too. He knew what his mother was doing but turned his head the other way. He didn't want to be on her bad side. He appealed to her sense of normalcy while Grant rebelled against her. Hearing Brian's encouraging words, Grant breaks free from the Goongaloonga's belly and frees his family. He pledges to his wife that he will put their family back together. Brian asks if he's ready to move on as they walk through a bright light.

Retrieved from "https://imagecomics.fandom.com/wiki/Black_Science_Vol_1_18?oldid=51102"
Community content is available under CC-BY-SA unless otherwise noted.