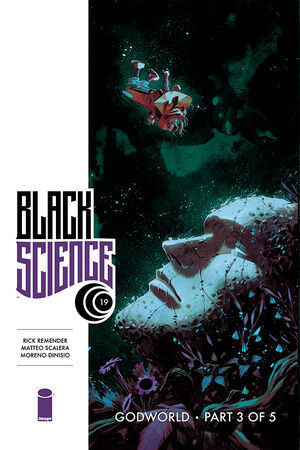 No power source. Right. Okay. Okay. Think. What energy is uniquely created by the element of life? Imagination!

Plot Synopsis for "Godworld, Part 3 of 5"

Grant McKay relives his memories when his father took him to work as a small boy. He told Grant that his trade and his time area ll that he had to offer him as he took up his Saturdays by teaching him his trade of construction. Young Grant saw it as a waste of time when he was little.

In the present, Grant takes it all back and wishes he could spend more time with his father. He continues to push higher up a structure with a backpack and toolbox. He hears his father's voice from the toolbox and realizes he must let go, so he drops the toolbox.

Soon he is haunted by his mother continually chiding him for telling on her cheating ways. In the present, he hears the backpack talking to him in his mother's voice. He drops the backpack as well and realizes he is no longer carrying the weight of his past.

He arrives at the top where a large structure welcomes him. It tells Grant that it has been holding his memories as they have been a burden on him and have been holding him back. It then offers Grant a chance to regain all his memories. Grant says he will become his own man and moves on.

He suddenly realizes he's built a Pillar and can use it to track his lost teammates. He sets a course for the closest member and takes off the rescue them.

“GODWORLD,” Part Three. A meeting with the Godhead.

Retrieved from "https://imagecomics.fandom.com/wiki/Black_Science_Vol_1_19?oldid=67799"
Community content is available under CC-BY-SA unless otherwise noted.