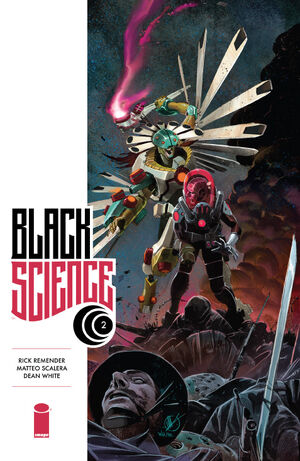 A while back, Grant McKay and Rebecca smoked weed at the office. Grant recalls only being into science and his wife Sara McKay thinks its validation for his ego. Rebecca quips he's too introspective when he gets high as they both relax in their underwear.

In the present, Shawn continues to freak out about having set the homing beacon correctly. Grant looks at the controls and notices the homing beacon is smashed and curses that there's a constant countdown on the Pillar so they can't control where or when they'll jump between dimensions. Kadir and Grant's children both complain they want to go home and Grant consoles them telling them he'll fix it.

Rebecca, Chandra, and Kadir exchange words insinuating they each smashed the Pillar for their own selfish reasons. Grant tells them to shut it and focus. He votes for Ward to be their new leader since he's ex-military and security.

They are interrupted by a man yelling German. When the man attempts to stab Shawn with his musket, Grant pushes Shawn out of the way taking the stab. Ward jumps to action and subdues the man. Kadir informs them he knows a little german. They learn the man's name is Private Schmitt. They are in Europe and the Germans are being routed by people from an uncharted continent, the Sons of the Wakan Tech-Tanka and Mecha-Hopi. Kadir tells Schmitt they also are from an unknown place, and in order to return, they need the man he just stabbed. Schmitt tells them to save Grant they need an indian shaman who can heal him.

Seven hours previously, The Anarchistic Order of Scientists celebrated having run a successful test with the Pillar by bring back flora from another dimension. Kadir stormed in with Chandra chasing. He's furious they tested it and wondered how Chandra didn't know. She said it wasn't on the schedule to have been tested and Grant says they thought he wouldn't mind as long as they informed Mr. Blokk that it was working.

In the present, Ward brings Shawn and a resistant Kadir to find a shaman to save Grant. They crawl under dead bodies and sneak past robotic crows.

At the camp, Grant passes out from the blood loss.

Retrieved from "https://imagecomics.fandom.com/wiki/Black_Science_Vol_1_2?oldid=65008"
Community content is available under CC-BY-SA unless otherwise noted.