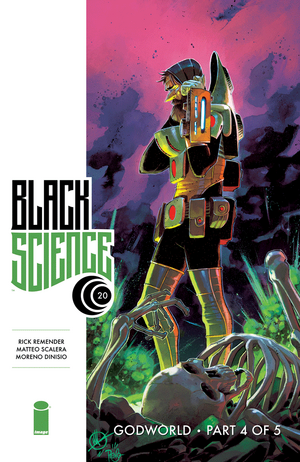 Don't judge yourself against the normals. Behind closed doors they fight, do drugs, cheat, and sceam -- they just do a better job pretending they don't.

After crash landing, Grant McKay wakes up in the world they had been tracking a Dimensionaut suit. He asks his ship if it knows which member it tracked, and the ship replies that it is unable to determine that sort of information.

He sets out and and stumbles upon a Dralyn. The Dralyn uses its Telepathy to attempt to subdue Grant. However, Grant closes his distance and slices through the Dralyn's neck, killing it.

Grant continues to explore and finds Ward's corpse lying in a ditch. He activates a recording from the suit which was Ward's last words. He speaks of how Kadir left him to die. Grant realizes he wasn't responsible for his death and breaths a sigh of relief knowing it was Kadir's fault. He recalls back to when Ward was at his house a long time ago and he advised Grant to appreciate what he had. Grant was skeptical and had a pessimistic nature that everyone takes advantage of everyone else -- like Kadir. In the present, Grant promises to Ward's corpse that he will make his sacrifice mean something.

The Pillar ship returns and tells him it is armed with weapons that will help him in his quest.

Elsewhere, the Blokk Dralyn has corralled the Blokk of the Indian's Revenge dimension. The Dralyn kills the Blokk when he refuses to admit his superiority. After, he orders his troops to prepare to jump as they've killed everyone in this dimension. Suddenly, Grant arrives with a space suit and weapons. The Blokk claims he doesn't understand the design of the Eucalyptus as the two fight. Grant escapes when he's about to be overpowered and jumps onto his ship. He asks the computer if it has a laser. The ship replies it does as it blasts the leader and the pillar to prevent them from spreading their terror. He tells the ship to set the coordinates to the next dimensionaut beacon as they take off.

“Godworld” Part 4 The last Dimensionaut returns to save the Eververse.

Retrieved from "https://imagecomics.fandom.com/wiki/Black_Science_Vol_1_20?oldid=55434"
Community content is available under CC-BY-SA unless otherwise noted.