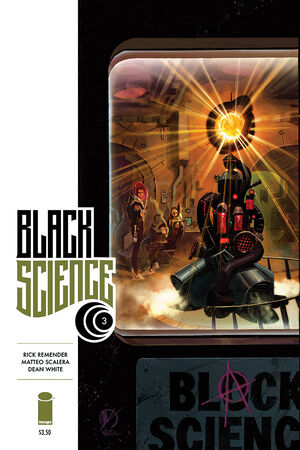 Earlier, Kadir phones Mr. Blokk, and tells him that Grant McKay failed at creating the Pillar, and gets approval from Mr. Blokk to fire Grant and his team.

In another room, Grant continues his affair with his lab assistant, Rebecca. Rebecca notices Grant is still wearing his wedding ring, and she tells Grant seeing his wedding ring is a mood killer. Grant insists he keeps the ring on to keep up appearances of his marriage for the sake of his children, but Rebecca rejects Grant using his kids as an excuse, and accuses him of liking the thrill of having an affair. Rebecca decides she won't take part in an affair any longer, and tells Grant it's time for him to make a decision between her, and his wife Sara. Grant professes his love and need for Rebecca, and tells her he will end things with Sara that night. Grant and Rebecca embrace one another, and kiss.

In the present, unseen on rocks above, Ward witnesses a shaman heal a man from injuries. He turns to Kadir and Shawn, and devises a plan to kidnap the shaman, and bring him back to camp in order to heal Grant's injuries.[1] Ward and Shawn knock the shaman unconscious, but just as they are about to escape, they are spotted by a Mecha-Hopi. Shawn and Ward are attacked, and knocked down by the Mecha-Hopi. Kadir, though scared and timid, throws a grenade, which gets lodged into an air vent of the Mecha-Hopi, and destroys the machine. The men gather their senses and continue their escape.

Back at the camp, Chandra points her gun at Private Schmitt while telling him to stop mumbling since she can't understand German. Rebecca tells Chandra she needs to calm down, if not, she'll draw the soldiers to their camp. She points out to Chandra that when Private Schmitt saw their technology, he thought they were the enemy, and urges her to think about what will happen if Private Schmitt's comrades find him being held hostage. Rebecca takes the gun away from Chandra, telling her she's trying to stop her from doing something she'll regret. Rebecca gives the gun to Pia McKay, and charges her with watching over Private Schmitt. Rebecca acknowledges Pia's fear of the situation they're all in, and confesses that she's scared as well. Chandra notices Germans on the ridge, and Private Schmitt starts screaming for help. Rebecca jumps into action, and shoves Private Schmitt's face into the mud, suffocating him. The Germans figure they misheard, and keep moving without seeing the dimensionauts.

In a flashback, Grant showed his children the Pillar, as the rest of the dimensionauts all walked into the room. Grant explained how expansive this Eververse is, and how theoretically, anything of the imagination could be acquired now that the Pillar had been successfully created (e.g., the cure for cancer, rare minerals, and unimaginable technologies that could be used to fix the problems faced by mankind). Nathan asked if God is at the centre of the Eververse, and Grant said that while God doesn't exist, the centre of the Eververse is the closet thing.

Suddenly, to everyone's surprise, the Pillar started to spark. Kadir burst into the room, asked Grant what he was doing there with his kids, and ordered them to get out. Grant yelled for everyone to run, but the Pillar caused everyone to disappear before they could leave.

Retrieved from "https://imagecomics.fandom.com/wiki/Black_Science_Vol_1_3?oldid=65012"
Community content is available under CC-BY-SA unless otherwise noted.