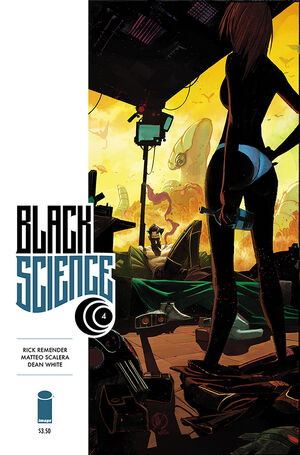 Kadir, Ward, and Shawn continue to rush the Sons of the Wakan Tech-Tanka shaman back to camp to heal Grant McKay from his injuries.[1] They are attacked by a group of Indians. Shawn decapitates them by laying down a barb wire that they run through at high speed on their horses. The noise attracts more mechanized indians. Ward orders Shawn to carry the shaman back to camp to heal Grant. He tells Kadir, who's picked up one of their hatchet weapons, to stand his ground with him. Kadir freaks out and says they'll die and Ward tells him not if they work together.

Panicking as they are attacked and Ward is sustaining injuries, Kadir takes off back to camp instead of helping him. Ward cusses under his breath as he realizes he won't make it out alive. The Indians tackle him and prep him for scalping.

The Pillar continues to count down as Kadir jumps into the moat with the rest of the dimensionauts. The Pillar lets off a bright white light as they jump dimensions.

Grant wakes up healed with Rebecca tending to him. She tells him the shaman agreed to help him once he saw his kids in tears over him. Rebecca tells him that they shouldn't worry about who smashed the Pillar, but instead focus on finding parts and fixing it.

Chandra returns to base with parts and food for Kadir. She tells Kadir that she knows his secret that he left Ward behind to die. She tells him she agrees self-preservation is important as she puts her hand on his leg and tells him they need to be on the same page.

An unknown man with the Onion Badge on his chest ports into the dimension with a hand held pillar in his hand. He tells a voice on his comm that they are definitely in this dimension and he'll stop them from making any more jumps.

Retrieved from "https://imagecomics.fandom.com/wiki/Black_Science_Vol_1_4?oldid=65013"
Community content is available under CC-BY-SA unless otherwise noted.