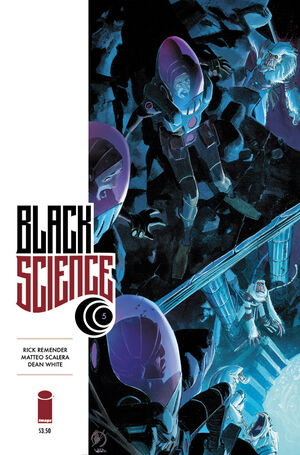 Chandra and Kadir continue their talk,[1] and Kadir tells her how Grant McKay was always so pompous in school and he hated him since the beginning. Chandra thinks Grant’s front was a lie, and people love liars. Kadir asks her why people hate them.

In their bedroom, Grant and Shawn wake up Pia McKay and Nathan McKay. They're excited to see their dad is alive.

Grant recalls back to a time where he, Ward, and Jennifer were working in the lab. Ward recommended anti-gravity boots and Jen showed them the Onion Badge for their suits. Grant was excited at the symbol and told her it probably stands for a symbol of hope all across parallel universes.

In the present, Grant tells the kids not to worry. Nathan wants to stay in the safe dimension but Grant tells him that it would take a decade to get the funds and materials to rebuild the Pillar once it jumps. It would be best to stay with it and try and repair it. Grant walks away to gather the troops to prepare to jump in 20 minutes.

The man in the mask returns and knocks Shawn out with an electric tazer. He tries to grab the kids and tell them he's going to return them to their mother but they knock the handheld pillar out of his hands shattering on the ground below by Grant and Rebecca.

The man rushes the kids with him as he shoots a man in a car. They kids freak out and he tells them the man wasn't real, and that none of this is real. Grant suddenly appears and knocks the man's helmet off revealing the man is also Grant. Grant Sr. grabs the kids and jumps into the car of the man he shot. Grant Jr. gives chase on a bird creature from this dimension.

Grant Sr. tells them that Grant Jr. is not the man they deserve, he won't protect them the way he can. He gets them across town to a facility where they see a senior version of their mom.

Grant Jr. arrives to take his kids. Grants Sr. explains he's from a dimension where the Pillar exploded killing Pia and Nathan instead of porting them. He tells them every time the Pillar makes a jump it punches a hole through the fabric of reality. Grant Sr. tells them every Grant in the history of the eververse gets his kids killed and they want to save them. As Grant Sr. and Sara Sr. port out, they warn Grant Jr. that Kadir is the saboteur, and is always the saboteur in every dimension.

Grant rushes back just in time as the Pillar ports them to a new dimension. Grant promptly punches Kadir blaming him for destroying the Pillar. Kadir promptly blames Rebecca and tells Grant he should have stopped sleeping with her. In a rage, Grant tackles Kadir into an icy pit below surrounded by white monkeys.

Retrieved from "https://imagecomics.fandom.com/wiki/Black_Science_Vol_1_5?oldid=65014"
Community content is available under CC-BY-SA unless otherwise noted.