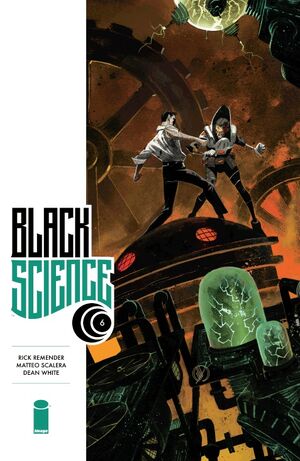 Kadir and Grant McKay land in a water nursery in the middle of the icy pit as they continue fighting. Grant is first out of the cave as the Monkeys give chase to him. When Kadir pops out of the water, they turn around and focus on Kadir.

Up top, Chandra heads off to find Kadir. Pia McKay blames Rebecca for sleeping with her dad and tells her to stay away from her family. She wants to leave and find her dad as well but Rebecca bickers they should stay put. Shawn steps in try and break up the fight, but it is ultimately stopped when Nathan McKay fires a shot in the air and tells everyone to stay put.

When Kadir swipes his hatchet at a gorilla, he knocks a yellow orb releasing a fire spirit of sort. The spirit enters the body of one of the baby monkeys. He realizes the monkeys are protecting the spirits, not the baby monkeys and they must be infected by some spirit parasite. Kadir gets a way in the commotion but is tackled by Grant through a building. As they pick themselves up, they are in shock that the building has a Pillar and the same Onion Badge on it. Kadir takes off and stumbles on a wire on his way out. The Pillar falls over and is smashed. Grant thinks back to Grant Sr's comments that the Pillar is always destroyed by Kadir.[1]

As Kadir is backed into the corner, he protests he had to destroy the original Pillar, it was too dangerous. Grant begs why he'd be hired, and Kadir tells him he expected Grant to fail. Grant calls Kadir out and thinks he was just going to steal the device and take credit for it.

Suddenly, the monkey from the Pillar attacks and Kadir pushes Grant out of the way. As Kadir battles the monkey, a large cabinet begins to fall on Grant and crushes his spine trapping him underneath. Kadir beheads the monkey with his hatchet. The fire spirit in the monkey emerges, and runs off when Kadir shakes his hatchet at it.

Around the corner, Chandra continues searching for Kadir. The fire spirit comes directly for her and enters her body changing her eye color temporarily.

As Kadir tries to help Grant with the cabinet, Grant tells him there is no time. He knows Kadir believes in self-preservation so he expects him to take his kids with him. Kadir runs off and finds Chandra to head back to the Pillar before it jumps.

As Grant bleeds out, he searches his pouch for a picture of his wife and can't believe he didn't pack one.

As Chandra and Kadir escape, Kadir kills another monkey. When the fire spirit comes out, Chandra speaks in its language that, "this host is taken" and the other spirit replies it will dance with another.

Grant becomes faint, and wonders if there's at least one dimension where he didn't screw things up with his wife, Sara.

The Shaman blasts the fire spirit and Kadir and Chandra make it back to the Pillar as it jumps. Kadir tells the kids Grant won't be making it.

Retrieved from "https://imagecomics.fandom.com/wiki/Black_Science_Vol_1_6?oldid=55191"
Community content is available under CC-BY-SA unless otherwise noted.