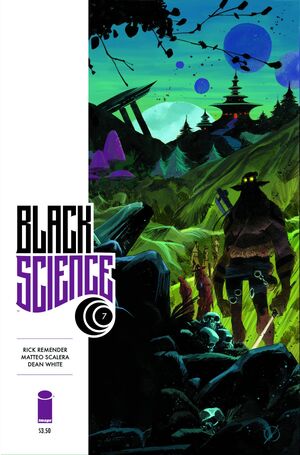 Rebecca, Pia McKay, Nathan McKay, and Shawn are tied up and being transported by strange reptilian creatures. In their tongue, they discern the time of the harvest is upon them as they sacrifice the pink goblins.

One of the goblins in armor, hijacks the chariot they are on and escapes out of the castle with them. The knight reveals himself to be Kadir. The shaman helps them escape as well. The people are surprised to see Kadir put himself in such heriocs. Kadir thinks to himself how a dying man's promise is the most powerful oath in the world. He recalls promising to Grant McKay that he'd protect his children.[1]

During the scuffle, the chariot breaks free and heads over a cliff. Kadir laments he's unable to save the chariot with Nate and Pia on it, and thus breaking his vow to Grant.

Retrieved from "https://imagecomics.fandom.com/wiki/Black_Science_Vol_1_7?oldid=55192"
Community content is available under CC-BY-SA unless otherwise noted.