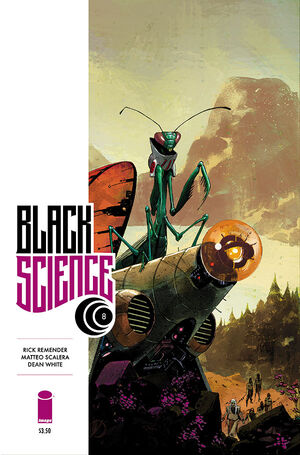 Pia McKay and Nathan McKay continuing falling off the castle in the sky. Nate thinks about when he was eight. He had been bullied by a boy named Peter Howitzer. After eventually chipping his tooth by having his face pushed in by Peter, he told the principal who named him in the accusation. At the time, Grant told him if he ever wanted to make it, he’d have to learn to take care of himself. Nate then began taking karate lessons. Eventually, he lured Peter after school to the woods where he tied him up and mercilessly tortured him. Nate told Peter as he walked away if he screamed loud enough someone might eventually save him.

As Nate and Pia fall, the local wildlife, resembling sloths, catch them with their tongue. As they are pulled towards their razor sharp teeth, Nate is resourceful with using sharp twigs to stab the creature and cut off its tongue freeing himself. Nate thinks about how he can keep his promise to his dad of taking care of himself and his sister at this moment.

Chandra speaks in a fire spirit voice as she looks at the Pillar and calls it primitive. When Kadir tells her to be careful, she instantly snaps back into Chandra and English and tells him she was just looking. Shawn heads off to get firewood as it will be dark soon. Rebecca becomes more negative with all the situations they’ve been put through and Shawn tells her they need to press on.

The Shaman suddenly interrupts telling them, “It’s black science”. Shocked that he can speak english, they listen as he tells them he was biding his time before saying anything. He tells them about his past with finding one in his dimension. They used it to find advanced technology and exact their revenge on the white men who took their land. This was why they were invading Europe, a matter of hubris and revenge. When asked about who brought the pillar to his dimension, he tells them it was a scientist that they killed. He says the weak always die and it’s the way of life.

Kadir tells him he’s crazy and that he sabotaged the device, it’s not black science and it’s not some ultimate plan. Rebecca punches Kadir in frustration for his zealousness. Kadir admits he’s made mistakes, but that doesn’t make him a calculated killer.

Pia tells Nate they have to push on in order to get back to the Pillar in time. They suddenly hear a noise from a local tribe of red-eyed creations carrying axes. When Pia makes a noise, they are spotted by the local trolls.

Retrieved from "https://imagecomics.fandom.com/wiki/Black_Science_Vol_1_8?oldid=55193"
Community content is available under CC-BY-SA unless otherwise noted.