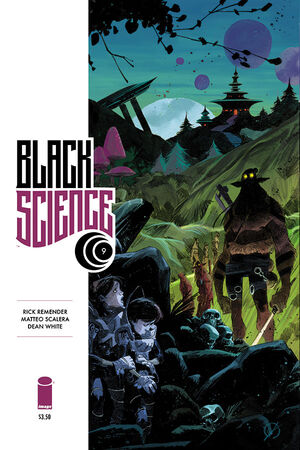 Rebecca recalls being on a family trip many years ago with her family. Her twin, Jake, was playing hide-and-go seek with her. She pressured him into playing one more round even though there was only an hour left before nightfall. Jake fell into a well and began sinking into the mud. Rebecca ran for help but couldn't find it in time as Jake had the compass. She blamed herself and wondered if there was dimensions where she wasn't responsible for his death.

Below, Pia McKay and Nathan McKay are spotted by the wild trolls. When they are attacked by them, they are suddenly saved by a telepathic worm death cult. They death cult promises salvation through death and wears the same Onion Badge as the children. Nate tries to protect the youngest troll, Krolar. Right before they are sacrificed, the telepathic worm is astonished to see them wearing the same Onion Badge. They grab the children and take them with them.

A winged mantis flashes in the background a white light similar to what happens when they dimension hop.

A man in a middle-eastern robe gives chase to another vehicle. He references a eucalyptus and being brought to a land unprepared. The man in the other vehicle looks like a middle-eastern version of Kadir. He opens a briefcase where inside an unseen golden light shines on his face as he smiles. The robbed pursuer pulls out a gun and assaults the vehicle with bullets and the man with the briefcase returns fire. As they pull up to a location, the man with the briefcase exists the vehicle and runs into a building instructing his henchman to kill his pursuer. The robbed pursuer leaps from the moving vehicle and lets it unmanned run into the blockade his henchman setup. Brushing himself off, the man pulls off his garb to reveal it is Grant.

Retrieved from "https://imagecomics.fandom.com/wiki/Black_Science_Vol_1_9?oldid=55194"
Community content is available under CC-BY-SA unless otherwise noted.