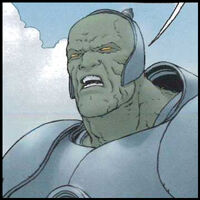 The interplanetary villain known as Blackstar has a anti-matter battery buried into his chest and is responsible for the genocide and an entire alien species.

Blackstar later attacked Earth but was fought off by the combined forces of the superheroes of the planet, led by Utopian. However, it wasn't until Brain Wave's intervention that Blackstar was defeated and killed.

Retrieved from "https://imagecomics.fandom.com/wiki/Blackstar_(Jupiter%27s_Legacy)?oldid=59615"
Community content is available under CC-BY-SA unless otherwise noted.