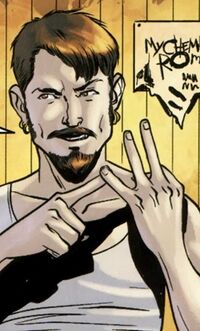 As Blaine Abel was a young boy, his uncle came to live with him. He'd let Blaine drink mountain dew, watch movies, and stay up late so he would grow fond of him. Eventually, his uncle changed into what Blaine felt was a demon. Blaine killed him to release him from his curse.[1]

Later in life as an adult, Blaine arrived at a trailer park in Weston to perform an exorcism. He discovered that the girl was faking it and threatened her to come clean and left.[2]

Later at a bar, Blaine spotted Mrs. Vang and May Tao at a bar where Thang asked her to look at a ring she stole. As they left, Blaine walked over to help Mrs. Vang change her flat tire.[3] Blaine then stalked and kidnapped May Tao and stole the ring from Thang's home.[4]

When May woke up and was tied up in his snowmobile repair shop, he told her he believed there was a war with God that he was helping to fight it for him. He heard a scream from outside as Em Cypress was being attacked by a Creep. He ventured outside and recognized the look in Em's eyes as the same as his uncles and believed she was possessed.[5] Em uses ring from Blaine's circle to lure the Creep into water which appeared to destroy it. She then released May but they were soon chased by Blaine. When Em was shot by Blaine's arrow, May was shocked to learn she was a Reviver. Em jumps on Blaine's snowmobile and forced it to crash sending Blaine to the hospital with critical injuries.[5]

Later, Blaine saw May Tao in the hospital and asked her why the cops haven't bothered him. He figured the only reason she would have given up the story would be if she has a better one in the works.[6] May brought a photo to Blaine Abel and asked if he recognized Mr. Check. Blaine didn't but wondered what they're doing in the Forestry Unit. He told her it's the only place in town with white birch trees, giving May a critical clue to search into the Check's past.[7]

May Tao returned to this hospital and learned Thang Vang was being treated for smoke inhalation after Joe Myers self-immolated in her room. Abel warned May that Myers looked like he was possessed by a demon. Blaine told her that the first time he saw that was in his uncle. The second time he had seen someone possessed was when he saw Em giving May another clue to search into the Check's past and the secret of Revivers.[8]

Retrieved from "https://imagecomics.fandom.com/wiki/Blaine_Abel_(Revival)?oldid=41252"
Community content is available under CC-BY-SA unless otherwise noted.