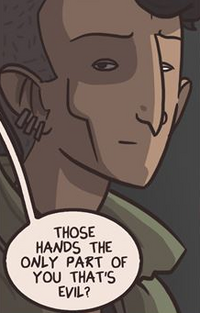 Blaise Ramirez is the reincarnation of Saint Blaise. He has dreams where everything is seen in gold and he see's the life and death of people he feels he knows.[1]

Backstage at a concert, Blaise used his dark touch to recover Glarg. While looking from backstage, he saw San Sebastiano, a face he recognized from his dreams. Sebastian then fired a golden arrow with a note attached for Blaise, telling him to meet him outside. Blaise attacked Sebastian for firing an arrow toward him, though Sebastian overpowered him. Blaise then had another of his dreams as he was carried to his care by Sebastian. Sebastian then introduced himself to Blaise, being told he was sent to find him. They arrived at a local grocery store, where Sebastian told Blaise that the girl in his dreams worked there. As Lucy took out the trash, Blaise approached her, though he was attacked by Lucy, with Lucy believing Blaise wanting her "v". Blaise explained he has a crush on Lucy, though didn't want her "v". Lucy looked Blaise in the eyes and saw everything Blaise was and will be and their future. Lucy then kissed Blaise, but immediately regretted it. Blaise then told that they have been in each others dreams and they should believe it was for a reason and they should follow it.[1]

Blaise and Sebastian followed Lucy back to her home, where Blaise crashed his car. At Lucy's house, Blaise told the Sweetapple's that he admired their painting of Jesus. Blaise then complimented their homemade cookies. After the Sweetapple's learned their daughter is a Saint, they told them they would offer any help they need on their way. Blaise told them they are in need of a car as he crashed his. When the Sweetapple's went to pray with their daughter, Blaise and Sebastian stole their painting of Jesus.[2]

On their way to Arizona, after Lucy commented that she believed she's the only sane one around, Blaise reminded her she has candles in her hair. When Blaise teased her, Lucy threw her burger at Blaise. After Lucy fell asleep, Sebastian commented that he was hard on Lucy. Blaise told Sebastian that he was tired of her making sense. Hours later, the painting of Jesus began to speak and woke Blaise up, initially believing it was Lucy who was speaking. Blasie woke Sebastian up and the two fled the car. Before Sebastian could fire an arrow at the painting, Blaise told him that Lucy was still in the car. Blaise threw a rock in an attempt to work her up but to no avail. When Blaise went up to Lucy, the latter held the painting up. After Lucy woke up, she teased Blaise on how the painting called him a fool. When Sebastian told them the painting sent them a message, Blaise arrogantly told them he knew the painting would be useful.[2]

At a diner in Arizona, the three waited for the fourth saint while Blaise chowed on waffles. After Sebastian caught the saint's attention, the Saint ran and the three ran after him. When they told him they weren't going to hurt him, the saint surprised them with his levitating powers.[2]

Blaise cowered away while Sebastian and Lucy were defending themselves from Stephen. When Lucy asked for help, he told her he's a healer and not a fighter. Suddenly, Stephen lifted the ground behind Blaise and Lucy grabbed Blaise out of the way before he could be crushed. Blaise then begged "Jesus Pimp" to give Stephen cancer or asthma. He then asked Jesus Pimp to make Stephen at least choke to death and Stephen began coughing. The media then surrounded the four and Sebastian told the two they should go but Blaise wanted to give autographs first.[3]

The three take Stephen to New Mexico and stop at a gas station on the way. While Sebastian was communing to Jesus Pimp, the four were attacked by Michael's followers. Blaise knocked Sebastian down, saving him from being shot, though Jesus Pimp was shot in the head. Blaise then fought one of the men. Blaise was eventually overpowered and strangled but the man suddenly fell and Blaise's arm began to glow.[3]

Blaise awoke in the car. Lucy told him he was having a bad dream and they could talk. Shortly after, they arrived to their destination in Albuquerque. Blaise introduced the Saints to Mutilated Corpse, a band he was a groupie of. Later, Jose took Blaise to his basement. Jose cut Blaise's hand to perform a ritual but to no success.[4]

At night, Blaise was woken up by Lucy, who told him he had a three headed dog on him, though Blaise couldn't see it. Lucy hit Bael who jumped off Blaise's chest. When Stephen woke up, he told them it was a demon and that it meant something bad had just happened. The demon went toward "Jesus Pimp" where it told them "Rejoice, for now you go to war".[4]