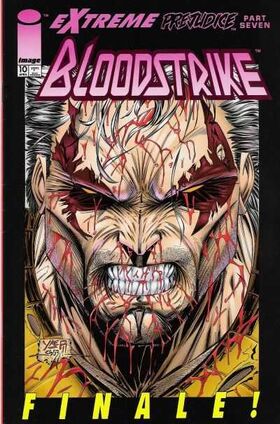 Battlestone and the assembled members of Bloodstrike, Brigade, the New Men, Youngblood, and the Brotherhood of Man confront Quantum.  Indignant that his sons have turned against him, Quantum reveals that the Brotherhood of Man killed their mother.  The revelation makes Cabbot and Battlestone hesitate so Chapel leads an assault, but Quantum easily deflects it.  Sentinel arrives with the inhibitor device and explains to Battlestone it must be physically placed on Quantum’s body.  Proctor arrives as well with Reign and the Extreme Warrior who has agreed to help. Meanwhile, Noble updates Praether of the Covenant of the Sword.  They conspire to have Project:  Born Again resurrect a recently deceased witness in a Chicago trial and then leak it to the press.  Fourplay, Shogun, and Dutch distract Quantum long enough for Riptide to generate a tidal wave and direct it against him.  Reign then hits him with a psionic blast while Exit teleports in to attach the inhibitor device.  Before he can, however, the Brotherhood of Man turns on the assembled teams. Quantum annihilates the Brotherhood agents in a single massive blast and points to their treachery as justification for his war against humanity.  Sentinel asks Dash to attach the inhibitor to Quantum, but she refuses.  Instead, Cabbot leads Bloodstrike in a final charge against his father.  Quantum swiftly kills Shogun, Deadlock, and Fourplay and then blasts a hole through Cabbot’s chest.  Shocked that he has just fatally wounded his own son, Quantum pauses, and Cabbot uses the last of his strength to attach the inhibitor.  Chapel runs to his side, and Cabbot asks not to be resurrected again then dies.  Battlestone makes a snide comment, and Chapel punches him out.  Four days later, Sentinel talks with Proctor at Arlington National Cemetery following Cabbot’s funeral.  Sentinel reveals that Chapel has quit Bloodstrike and the future of the program is in doubt.  At Project: Born Again, two technicians receive a stasis pod containing the corpse of Cyberface, the witness to be resurrected.