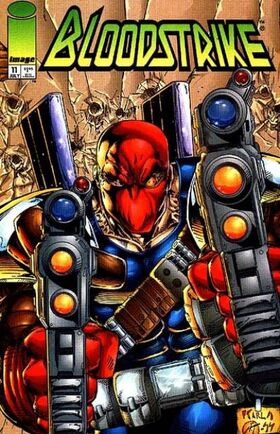 At Project:  Born Again headquarters, Leonard Noble has just overseen the resurrection of supervillain Cyberface when a swarm of armored troops breach the base and begin killing everyone.  They are the Purifiers, the U.S. government force directed to dispose of covert installations and personnel.  Their leader, Mars Gunther, introduces himself and explains to Noble that they know he is a mole for the Covenant of the Sword.  He compels Noble to reveal where the Covenant has taken a U.S. senator and his daughter then orders Noble’s execution.  Outside, Cyberface watches as the Purifiers leave and flees into the forest. Two days later, an aircraft approaches the Covenant’s base on the island of Mandrakas off the coast of Spain.  Flying it is Lily Nalin a.k.a. Athena joined by her teammates Bailout and Tower.  Together, they comprise the Experts, a strike team working for Gunther.  Once in position, they deploy Gunther’s latest operative, the assassin Bloodstrike.  Directed by Athena, he breaches the base and fights his way through Covenant forces to the cell holding the senator and his daughter.  To Athena’s horror, Bloodstrike then executes both of them.  Gunther notifies her Bloodstrike was following his orders. The senator and his daughter were already dead, and the two just killed were Covenant clones.  Athena guides Bloodstrike out of the base and extracts him. Meanwhile, the Savage Dragon and his partner reach the site of Project:  Born Again to pick up Cyberface only to find the complex completely destroyed. He vows to find and catch Cyberface.