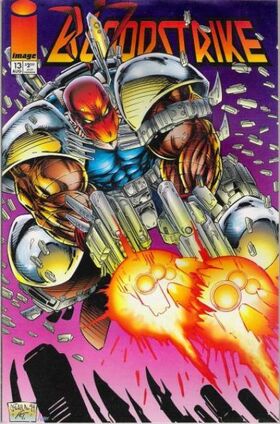 Appearing in "Better Off Dead!"

Plot Synopsis for "Better Off Dead!"

Bloodstrike has a vision of Death and wakes up in the sewers beneath the Cybernet base. Via an implant in Bloodstrike’s brain, Gunther informs him of the Experts’ capture and orders him to leave immediately.  He refuses and insists on rescuing them.  Elsewhere in the complex, Cybernet leader Olivia recognizes Bailout and Tower as former Cybernet members.  She then tortures the Experts for information, putting out one of Athena’s eyes. Bloodstrike fights his way through Cybernet’s forces and battles Olivia herself, impaling her with a sword.  He frees the Experts and leads them to a platform where they hijack a jet.  Six hours later, they arrive at the Darkness, Gunther’s mobile headquarters.  Gunther greets them and congratulates them on their success against Cybernet.  Outraged that he left them for dead, Athena decks him.  In New Orleans, agents of Cybernet, the Brotherhood of Man, and the Covenant of the Sword meet to hire the one mercenary they think can beat Bloodstrike:  Geist. Athena visits Bloodstrike in his quarters. He has just run his face through the main Pentagon database and found no matches.  He tells her that, until he discovers his identity, he will keep his mask on.