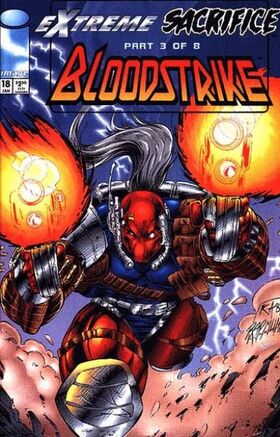 Vanguard and his robot Wally see news coverage of Supreme’s defeat but decide not to investigate.  Bloodstrike, Gunther, the Experts, and the Order of the Knight are on their way to Hyde Penitentiary, a U.S. prison for supervillains, to retrieve Order member Warwolf.  Upon arrival, Bloodstrike, Colonel Bravo, Link, and Tower fight their way past armored guards to Warwolf’s cell.  On the extradimensional island of Amazonia, Roman has come for Order member Glory.  When he finds her, she reveals that her fellow natives have inexplicably vanished.  She reluctantly agrees to go with Roman but plans to return later to find her people. At Hyde Penitentiary, Colonel Bravo frees Warwolf.  As they leave with the strike team, an armored guard shoots and apparently kills Tower. Back aboard the Experts’ jet, Bloodstrike grieves as he considered Tower a dear friend.  Gunther tries to take over the craft, but Link telepathically disables him.  Athena calls out the Order for their actions, but Bravo dismisses her because the fate of the world is at stake.  In Malibu, Crypt prowls outside Brigade’s headquarters and prepares to kill all inside.