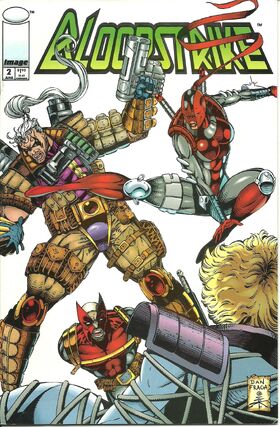 Cabbot sends Fourplay and Shogun to G.A.T.E. to take on Battlestone while the rest of the team secures their prisoners.  In Silicon Valley, Battlestone convinces Boone to hear him out.  He takes Boone and Hacker back to G.A.T.E. in Los Angeles and explains what happened to Brigade.  Given their past together, Boone questions why he should help Battlestone. Aboard Bloodstrike’s jet, Roam summarizes Kayo’s injuries and reveals Seahawk is somehow healing rapidly. Cabbot and Tag leave the room, and a woman called Lethal enters intent on freeing the two Brigade members.  Before she can, however, Deadlock catches her and attacks.  She defeats him, but Cabbot returns and engages her.  Just as he seems to have subdued her, she kicks him and frees Seahawk.


Appearing in "A Tale of the Knight part 1"

Plot Synopsis for "A Tale of the Knight part 1"

On a moon in the Andromeda Galaxy, three members of the Knight—Athena, Devel, and Ironside—investigate a trans-dimensional device.  They are immediately attacked by a group of Acurans, and a battle ensues.  They defeat the Acurans, but Athena and Devel fall in the course of the fight leaving Ironside distraught.  Elsewhere, Ironside's commander and her technicians observe Ironside and decide to keep the real truth of what just happened from him.