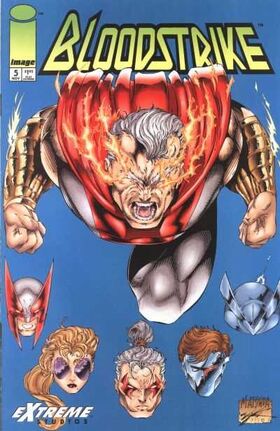 Security forces deploy as Cabbot battles Deadlock in the corridors of Bloodstrike’s headquarters.  Finally, Cabbot defeats Deadlock by punching out his spine, crippling him.  Afterward, Roam informs Bloodstrike their next mission is to take down Supreme.  They track him to Colorado where he has assaulted the mountain base of the terrorist group he recently battled at Dulles International Airport.  Supreme immediately senses the team’s arrival and tells them to leave.  Bloodstrike refuses and attacks.  He easily fends them off and retaliates by disemboweling Shogun, dismembering Fourplay, and flicking Tag away with his superhuman strength.  Cabbot opens fire with both his guns, but Supreme crushes them, claws his eyes out, punches his guts out, breaks off one of his legs, and snaps his spine.  Supreme flies away as Tag crawls back to her teammates’ corpses.  Hours later, armored troops bring Bloodstrike’s bodies to Project:  Born Again and report to its leader, Leonard Noble.  Noble observes Deadlock in a stasis tube and then uses an override command to take control of Roam.  Two days later, two men enter a subterranean base in rural Virginia and reveal themselves as members of the Covenant of the Sword.


Appearing in "A Tale of the Knight part 4"

Plot Synopsis for "A Tale of the Knight part 4"

Ironside realizes his team has been detected just before Acuran troops attack.  He, Militia, and Rival repel the assault only to be met by a robotic Battle-Cat.  Fortunately, Rival is able to channel his life force into an energy blast that destroys it.  The Acurans’ leader appears and, to the Knight’s horror, reveals himself to be their supposedly dead founder, Davros.