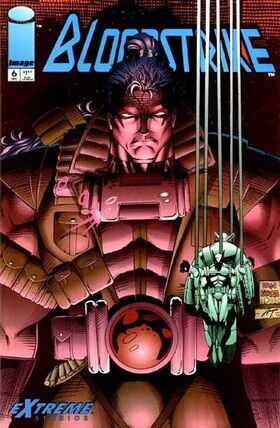 Appearing in "Inside Project: Born Again"

Technicians retrieve Fourplay’s corpse from cold storage, and doctors repair it in preparation for her resurrection.  Meanwhile, Roam informs Noble of Chapel’s recent dismissal from Youngblood and subsequent transfer to Project:  Born Again. As doctors begin to revive him, Cabbot dreams of his first resurrection overseen by his brother, Battlestone.  In their Virginia base, two members of the Covenant of the Sword discuss their secret control of Born Again and Chapel’s impending addition to Bloodstrike.  A resurrected Shogun argues with Tag about the revival process and reminds her that, unlike her, not everyone on the team consented to it.  Cabbot resists being resurrected while, in his dream, he beats Battlestone to a pulp.  At last, he wakes up and assures the scared technicians that he is in control. Later, Noble introduces the rest of the team to their new field leader:  Chapel.