"Changing of the Guard" 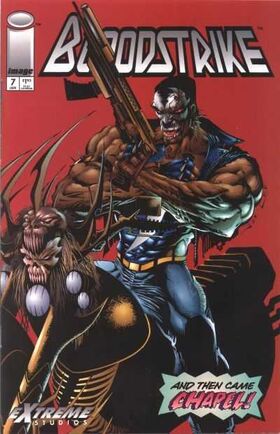 Appearing in "Changing of the Guard"

Plot Synopsis for "Changing of the Guard"

Chapel trains against combat droids as Cabbot and Badrock watch and discuss his transfer from Youngblood.  Later, he and Cabbot have a testy exchange at a team meeting.  In rural Virginia, the two Covenant of the Sword members argue over the risks of Chapel joining Bloodstrike.  Elsewhere, a woman named McLaughlin tries to convince private investigator Heaton to look into her murdered daughter’s case in Virginia.  Max, the man Tag recently forced herself upon, talks to his doctor about a strange illness he has had since the encounter. At Bloodstrike headquarters, Tag implores Cabbot to resist Chapel’s appointment as team leader, but he refuses.  Just then, Chapel summons Cabbot to a meeting. The two men begin to argue and, before long, come to blows.  Fourplay and Shogun arrive to break up the fight, and Noble reminds them they can all be easily replaced if they fail to behave.


Appearing in "A Tale of the Knight part 5"

Plot Synopsis for "A Tale of the Knight part 5"

Ironside and Rival attack Davros, but he easily repels them.  He explains how, on his final mission for the Order of the Knight, he was on the planet M’Shynn when it was destroyed by a godlike being named Abyss. Abyss spared Davros and, needing to consume vast quantities of energy to survive, tasked him with finding a source other than planets for sustenance.  Next, Davros forced the Acurans to work for him by threatening to have Abyss devour their homeworld.  He then established this outpost on the ninth moon of K’ythri as his base.  Disgusted, Militia lashes out, but Davros easily deflects her attack.  Ironside engages him hand-to-hand and gains the upper hand, but Davros teleports away.