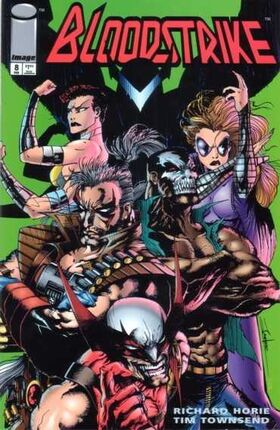 Chapel wakes up to Tag kneeling on his bed dressed in lingerie.  He shoots her in the chest, but she comes back to life and attacks as the rest of Bloodstrike enters the room.  He shoots them all, but then Al Simmons a.k.a. Spawn appears and tells him he has no one to blame but himself for the state of his life. Chapel awakens for real and calls Jason Wynn.  The next morning, Cabbot meets with Alan Keever and learns that the undersea Quantum Base has been damaged.  Chapel meets with Noble and asks how Cabbot accessed his personnel file.  Elsewhere, a doctor examines Max and determines his skin is rotting.  Fourplay finds Shogun finishing his remodeled armor and then watches Deadlock quarrel with Tag.  The alarm sounds, and the team departs for a meeting at the Pentagon.  At a police station in Virginia, private investigator Heaton reads the file on the murder of Mrs. McLaughlin’s daughter and discovers her eyes and arms were surgically removed.  At the Pentagon, Keever puts Bloodstrike on full alert due to the situation at Quantum Base, but Cabbot angrily insists the team must go there immediately.