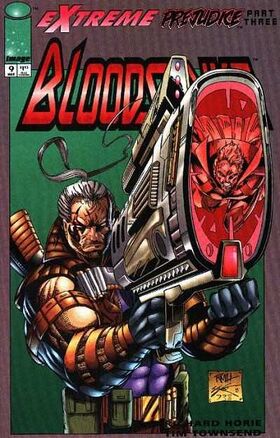 Cabbot, Chapel, and Noble meet with Alan Keever and Sentinel about how to deal with Quantum. Cabbot insists they attack immediately, but the others point out that Youngblood already tried to use brute force and failed.  Fed up, Cabbot storms out while Noble secretly briefs the Covenant of the Sword.  Roam tracks Quantum to Arizona, and Cabbot prepares to leave.  He and Chapel run into Battlestone who has come to help.  Cabbot lashes out at his brother, but Chapel, disgusted with Cabbot’s attitude, pulls rank as team leader and decides they will work together.  Half an hour later, Bloodstrike and Brigade arrive in Arizona at one of Quantum’s former bases.  Chapel, Deadlock, and Shogun find him inside, but he swiftly defeats them.  Brigade and the rest of Bloodstrike enter and attack but fare no better.  At the Pentagon, David Proctor meets with Vanessa Wayland, another former member of the New Men, and fails to convince her to help stop Quantum.  However, two of her charges, Crucible and Exit, offer their help.  After they leave, Wayland is shot and killed by a Brotherhood of Man agent calling himself the Extreme Warrior.  In Arizona, having defeated both Bloodstrike and Brigade, Quantum declares he will force Battlestone and Cabbot to join him.  At Youngblood headquarters, Sentinel determines Quantum’s powers are unstable, threatening the safety of the entire planet.

White jumps the fence at the British embassy on her motorcycle, overcomes the security guards and a guard dog, and uses a grappling hook to climb into the building.