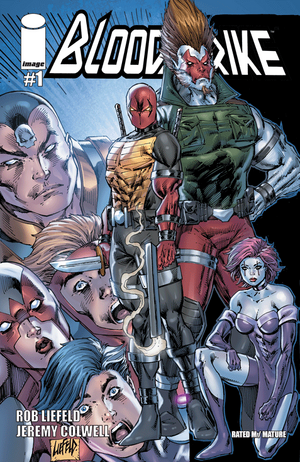 Gotta go full cannibal and eat myself outta this mess.

Appearing in "The Junk"

Plot Synopsis for "The Junk"

Codename Alpha finds himself strung in a prison, with his lower body cut off. He eats his arm off to swing to a place where he can get to reception to call for help.

Fifteen minutes previously, Alpha was infiltrating a base in Tokyo, Japan. When he found his target, Tragedy Ann, he was knocked out with sleeping gas and placed in jail.

Cabbot Stone receives the call and rushes to his side to help him. They fight over whether to leave or whether to go after Tragedy Ann. Cabbot places a mobile regeneration mat for Alpha to regenerate his missing body pieces.

In Australia, Tragedy Ann reports to a woman about having captured Alpha.

Retrieved from "https://imagecomics.fandom.com/wiki/Bloodstrike_Vol_2_1?oldid=51812"
Community content is available under CC-BY-SA unless otherwise noted.