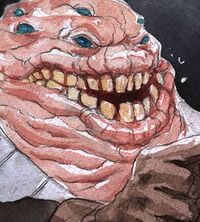 Blugger Vance is a mercenary who began hunting robots after the robot culls began. He became stranded on Dirishu-6 Moon after Tim-21 and Driller stole his ship and escaped the moon.[1]

After spending time waiting on the moon, he eventually ran into Andy Tavers. Andy had arrived on the moon after following a lead on a companion droid. Blugger convinced Andy to bring him on the journey as he had tagged Tim-21 with a tracker.[2]

Retrieved from "https://imagecomics.fandom.com/wiki/Blugger_Vance_(Descender)?oldid=62169"
Community content is available under CC-BY-SA unless otherwise noted.