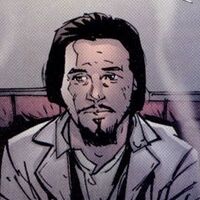 Bob Matson was a perp that was placed under bounty hunter arrest by Manara. When Bilal Christian later showed up and surprised Manara, he stole Bob to turn him in to Carl Munoz the bail bondsman. However, Manara called ahead and warned Munoz that Bilal was really coming to hurt Munoz. When he walked in, Bob was shot by Munoz who was shooting the first person to come through his door.[1]