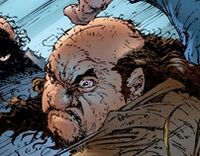 Bobby is one of Spawn's loyal followers from the Bowery Alleyways. When his wife came down with cancer, he found it hard to bounce back. He lost himself in a drunken, downward spiral that ended with him loosing his wife and child. He kept a trinket from his daughter, Suzie. He held onto it for 15 years and would look at it for hope to return to a better life. When he explained his situation to John Leekley, it was knocked out of his hands and shattered on the ground.[1]

As a result of Spawn hunting Chapel, Bobby got too close to danger. He was shot in the head by Chapel.[2] Refusing to let his friend die, Spawn resurrected Bobby at the expense of his limited Necroplasm.[3]

Over time, Bobby continued to stick near Spawn as a family member and always chose him as a friend without asking too many questions. When Spawn followed another bum, John, Spawn was subsequently shot. Word eventually reached Bobby of what happened. Bobby rallied the bums to lead a turf war against the bum John which ultimately led to a wave of deaths from the New York City bums. When Bobby fell as well, he was pulled from the throes of battle by his friend Boots.[4]

Spawn was soon pulled into the Greenworld and abandoned his old home of Rat City. As a result, Bobby was not seen much after the loss of Boots.[5]