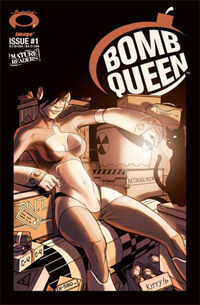 Bomb Queen is the name of a comic book character, created by Jimmie Robinson. She has appeared in both miniseries and one-shot comics, but her primary appearances are in the limited series eponymously titled Bomb Queen, published by Image Comics. The Queen herself is a villainess who has eliminated and subsequently banned all superheroes from the city of New Port. She rules the city as a benevolent dictator; the limitations she has placed over the city's criminals have made her a popular leader.

The history of Bomb Queen

Bomb Queen was originally part of a quartet of supervillains called The Four Queens, who reigned over New Port City. When all the super-heroes in town were finally defeated or slain, the Queens turned on each other. Bomb Queen emerged as the victor, and took control over the local government.

Bomb Queen founded New Port City's "No Heroes" law, (outlawing superheroes) which made the town a magnet for criminals across America. This pleased politicians in Washington, D.C., due to the lowered crime rates in other states. However, the government was not happy with the self-elected leadership of Bomb Queen. Various smear campaigns having failed to dent her immense public popularity, the government turned to other options.

Bomb Queen's rule over the city (and her cavalier attitude to crime) caused the city to flourish. The city coffers were overflowing with laundered money, which caused New Port City to rival Las Vegas. This also resulted in private local TV stations, Intranet, and regional cable stations being allowed to air unrated content - often of Bomb Queen herself, in pornographic movies filmed from her fortified townhouse.

The restriction of the city limits kept Bomb Queen confined in her city of crime, but also present extreme danger if she were to ever leave - where the law is ready and waiting. This was illustrated in the one-shot comic, Blacklight vs. Bomb Queen (Aug. 2006). Bomb Queen, in disguise, traveled to Las Vegas in search of a weapon prototype at a gun convention and encountered the superheroine Blacklight.

Bomb Queen is never seen without her black cat, Ashe. The animal has mysterious origins; he appears to have some connections to the Mayans of South America. The cat's powers have saved the day in numerous situations, such as the finale of the Bomb Queen vs. Blacklight oneshot.

Under Image Comics' Shadowline banner, Bomb Queen has been printed as two miniseries and a one-shot, with a third miniseries currently running. These are denoted by Roman numerals and subtitles instead of the more traditional sequential order.

Bomb Queen is put on the defensive when a scheming politician introduces a superhero into the community to win back the people's favor. When the hero's efforts prove fruitless, the politician unleashes a chemically-created monster who threatens not only Bomb Queen but the city itself.

Bomb Queen, hard-up for romance, falls head-over-heels for an enigmatic stranger who may prove to be her undoing.

Bomb Queen, in disguise, travels to Las Vegas in search of a weapon prototype at a gun convention and runs into Blacklight, also visiting Las Vegas for a comic convention.

NOTE: Continuity-wise, this story falls in between the first two miniseries.