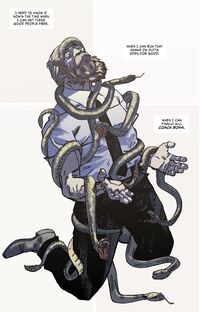 Most times being a leader is about making tough choices. Standing strong no matter what. Reminding folks there's lines that can't never be crossed. But other times... other times it's about making compromises. And sometimes, you can't tell the damn difference no more.

Deacon Boone is one of the few people from Craw County who has no interest in football. The last time he was at a football game was when he was a little kid. He tends to stick to the woods as it provides everything he needs. He learned to hunt from a young age from his dad.[1]

When the church in Piney Woods met to discuss the rape of a mentally challenged girl, Boone took off to take justice into his own hands. He killed Dale Arley as he frequently bragged about raping and murdering mentally challenged woman. He shot him with his compound bow and dumped his body in the river. He ran into several Running Rebs members on the river and refused to socialize.[1]