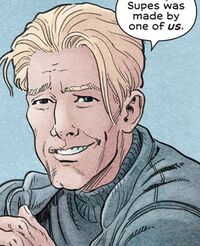 Booth was a member of the Two-Four Freedom Fighters. After helping to save Amber from a Dog of War, he helped take on an unmanned All-Terrain Vehicle. He brazenly shot at the door with his gun in an attmept to open the door and get to the computer controls. However, when they opened the door they discovered the vehicle was not unmanned. He was shot and killed by the pilot inside.[1]

Retrieved from "https://imagecomics.fandom.com/wiki/Booth_(We_Stand_on_Guard)?oldid=48378"
Community content is available under CC-BY-SA unless otherwise noted.