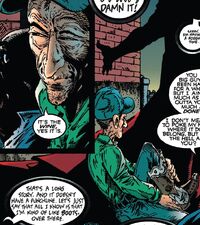 Boots is a on of the highest agents of Heaven, and an angel in disguise as a homeless man.[1]

As a mortal, Boots or Bootsy, blended in with his New York City bums in the Bowery Alleyways. The only things he owned was a pair of shiny cowboy boots. He took great pride and care of them as they are the only thing he owns.[2]

When a turf war broke out between all the homeless, Boots mysteriously choose to abstain from the fight.[3]. He was soon rebuked by Cogliostro and was revealed to be an Angel from Heaven. Boots claimed he was only allow to observe and was never to get involved.[4]. However, he soon found himself pulling his long-time friend Bobby out of homeless turf war even though he wasn't supposed to interfere with life of mortals[5] He soon stopped Wolfram from killing Spawn in the Dead Zone and said they had plans for spawn.[6]