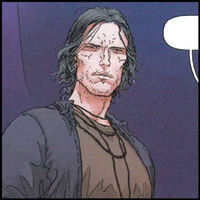 Brandon is the only son of Sheldon and Grace Sampson. He has an older sister named Chloe. Brandon and Chloe lived in the shadow of their famous and powerful parents and were miserable growing up because of it. Brandon began to resent and then later hate his father for his mistreatment of the two.

Brandon eventually came under the telepathic influence of his uncle Walter and together they plotted to kill Sheldon.

Chloe and Hutch Hutchence went on the run and eventually had a son named Jason and the three were in hiding from Brandon and Walter for years until recently.

Retrieved from "https://imagecomics.fandom.com/wiki/Brandon_Sampson_(Jupiter%27s_Legacy)?oldid=62811"
Community content is available under CC-BY-SA unless otherwise noted.