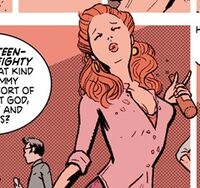 Master Lin soon declared finals were to kill all the rats, those that had disobeyed the rules of the school. Shabnam quickly made his move and teamed up with several students who were not rats, including Brandy. He became the mastermind to hunt down the rats, specifically wanting Marcus dead.[1]

Retrieved from "https://imagecomics.fandom.com/wiki/Brandy_Lynn_(Deadly_Class)?oldid=65143"
Community content is available under CC-BY-SA unless otherwise noted.